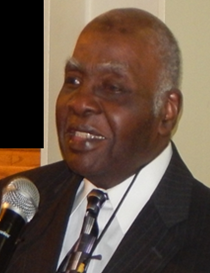 Deacon Edward Nelson Carraway, 87, entered into eternal rest and peace, on Saturday, December 2, 2017, after a brief illness. He was born on December 21, 1929, in Albany, NY and was educated in the Albany, NY school systems. He attended Albany Medical Center School of Nursing where he graduated as a Licensed Practical Nurse. He became employed at Albany Medical Center as an LPN- Nurse for 39 years until he retired. He became a very proud and faithful member of the Agape’ Apostolic Church of Deliverance, Troy, NY,  seven months before the Lord saw fit to call him home. He is predeceased by Evelyn Renee’ Carraway, his wife of 54 Years. He is also predeceased by 1 son, Sidney Allen Carraway, and by his parents, Nelson & Lila Mae Carraway, who also birthed 11 additional siblings to their union.  Deacon Edward Carraway, leaves to celebrate his heavenly homegoing several of his siblings; also 8 of his 9 children: James (Ruby) Carraway, Sharon (George) Sawin, John (Patricia) Carraway, Pennysa (John) Donley, Michael (Janine) Carraway, Jeffrey (Adrienna) Carraway, Mark (Mary) Carraway, and Paul Carraway.   He is also survived by a host of Grandchildren, Great- Grandchildren, Nieces and Nephews.  Homegoing Celebration Services will be held on Saturday, December 9, 2017. Viewing will be held at 10 a.m. followed by services at 11 a.m. at Agape’ Apostolic Church of Deliverance – 1010 Madison Avenue, Troy, NY 12180. (http://www.agapeapostolicchurch.com). Interment will be at: Parkview Cemetery- 40 Fehr Avenue, Schenectady, NY 12304.  A repass celebration dinner will follow at Agape’ Apostolic Church Fellowship Hall.  A very sincere and special THANK YOU to Every Supporter, Friend, Provider and Prayer Partner. To Catholic Charities, to Samaritan Hospital, to Capital District / Ellis Dialysis Center and to Pastor & Evangelist Camp & The Agape’ Apostolic Church of Deliverance Family.  In lieu of Flowers, a donation in Deacon Edward Carraway’s memory may be made to: Catholic Charities- USA, (and /or), to his Family.

To order memorial trees or send flowers to the family in memory of Edward Carraway, please visit our flower store.