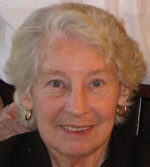 She was the daughter of the late Joseph Gallagher and Lorraine Riley Peterson and loving wife to the late Francis "Nick" Bouchard, he died in 2009.

Burial of cremated remains will be private at Oakwood Cemetery, Troy.

Donations in lieu of flowers may be made to Alzheimer's Association, www.alz.org. in memory of Joan Bouchard.

To order memorial trees or send flowers to the family in memory of Joan Bouchard, please visit our flower store.
Send a Sympathy Card