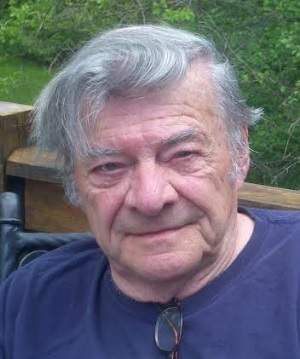 Born in the greatest generation, Joe was the beloved husband of Eileen Davin Mayer, and celebrated 61 years of marriage in July. He was the father of Susan Mayer (John McKeon) of Port Charlotte, FL and Rainbow Lake, NY, and Joseph Mayer of Schaghticoke, NY. He was the son of the late Joseph W. Mayer and Louise Miller Mayer of Troy.

In 1952 Joe joined the United States Airforce and was an F86 Sabre jet mechanic. He returned to Lansingburgh and worked for the City of Troy DPU, where he became a chief mechanic, and retired in 1989. Joe had a passion for older cars and loved working on them. He also owned and restored many motorboats over the years and had a lifelong interest in target shooting, fishing and camping in the Adirondacks.

An Elvis music lover, Joe was never happier than when he was with family and longtime friends, whether it be traveling, dining out or hanging out at the Mayer camp on the Hudson River in Easton.

One of his favorite trips was in 2006, when he returned to Malmstrom Air Force base in Montana where he was once stationed. And he couldn’t let a summer go by without at least one boat ride on the Mohican on Lake George.

Joe had a great love for his family and friends, who will miss him greatly.

Joe’s wife and children would like to thank the staff at Schuyler Ridge Nursing Home for the great care and compassion they gave Joe and his family. They are all angels.

In addition to his wife and children, Joe is survived by his nieces and nephews: Dennis (Gail) Van Wie, Elizabeth Sweeney, Kathy (Vic) Charron and Scott (Cindy) Van Wie.

Family and friends are invited and may call from 4:00 pm to 7:00 pm on Tuesday September 3, 2019 at the McLoughlin & Mason Funeral Home, corner of 109th Street and Third Avenue, Lansingburgh.

In lieu of flowers memorial donations in memory of Joseph may be made to Fisher Center for Alzheimer’s Research Foundation 110 East 42nd Street, 16th Floor, New York, NY 10017 or www.alzinfo.org.

To order memorial trees or send flowers to the family in memory of Joseph Mayer, please visit our flower store.