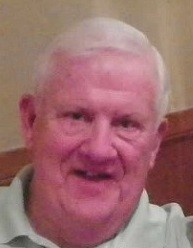 Patrick A. Byrne, 74 passed away on Sunday September 10, 2017 at Samaritan Hospital. Patrick was the son of Joseph Byrne and Lillian Kaiser Byrne and the loving husband to Marilyn Baum Byrne. He graduated from Catholic Central High School, class of 1960. Patrick worked for HSBC Bank for 36 years, retiring in 1997, after retirement he worked part time for Albany Medical Center.

He was an avid bowler and golfer at Frear Park, a former Board of Director for the Lansingburgh Boys and Girls Club, Treasurer of the Lansingburgh Little League, a longtime softball player at 112th Street, he received the “Man of the Year” award by the friends of 112th Street, a parishioner of St. Augustine’s Church, he served on the finance committee.

The family would like to thank the staff at Samaritan Hospital.

In addition to his wife Marilyn, he survived by his daughters Laurie Walsh (Edward) of Colonie and Lisa Scaringe (Raymond) of Clifton Park, his grandsons Jeffrey Walsh, Thomas Walsh, Alexander Scaringe and Dominic Scaringe, his brothers Richard of Albany, Martin (Deborah) of Clifton Park, David (Elizabeth) of Troy and Donald (Deanna) of Phoenix, also survived by several nieces and nephews.

Funeral mass 9:30 am on Thursday, September 14, 2017 at St. Augustine’s Church 25 115th Street, Lansingburgh. Burial will follow at St. John Cemetery. Family and friends are invited and may call on Wednesday September13, 2017 from 4:00 pm to 7:00 pm at the McLoughlin & Mason Funeral Home, corner of 109th Street and Third Avenue, Lansingburgh. Memorial donations may be made to Lansingburgh Boys and Girls Club 505 4th Ave. Troy, NY 12182 in memory of Patrick.  Please visit www.mcloughlinmason.com.

To order memorial trees or send flowers to the family in memory of Patrick Byrne, please visit our flower store.