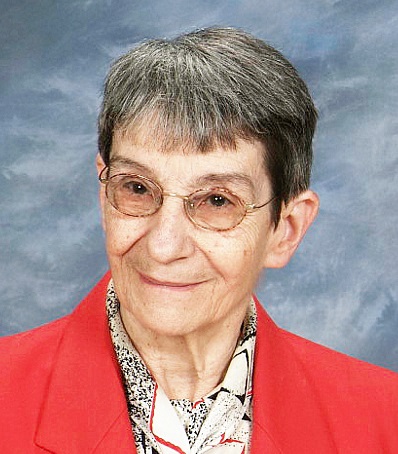 Sister Agnes Rose Burton, CSJ, died Tuesday, March 6, 2018, at St. Joseph’s Provincial House in Latham, NY. She had been a Sister of Saint Joseph for the past 66 years.

Born Mary Augusta on July 1, 1929, to Stanley and Madeline Burton (née Rudesheim), Sister Agnes grew up in Schenectady and at the family camp on nearby Mariaville Lake.

In 1947, she graduated from Nott Terrace High School in Schenectady and enrolled in The College of Saint Rose, Albany. To say that Sister Agnes got the most out of college would be an understatement. She engaged in her studies with verve, participated in the drama club and debate society, played bridge, planned social events, attended dances and games, and served in many leadership roles. She earned a bachelor’s degree in English, a master’s degree in history and later, a master’s degree in political science from the University at Albany (SUNY).

Sister Agnes professed final vows on August 15, 1955, and taught for 17 years in high schools throughout the Albany and Syracuse Dioceses. In 1971, she was dispatched to her alma mater, Saint Rose, as a history and political science professor. There, she taught her students, both in the classroom and by her example, to listen openly, think critically, and take action reasonably. She was an advisor, mentor, and committee member, and she established some of the College’s first internships at the local, state, and national levels. Her love for her students, especially for Saint Rose’s sports teams, was legendary, and many remember her opening her home to them during the holidays. She was honored with the Distinguished Faculty and the Carondelet Lifetime Achievement Awards.

In Albany government, she served as ward leader and executive committee member for the Republican Party, and she ran for Albany City Council president. Her keen intelligence, belief in the democratic process, and disarming personality earned admiration and friendship from both sides of the aisle.

Sister Agnes passed away as she had lived: peacefully, with grace and humble class, and surrounded by conversation and laughter. She is predeceased by her parents and sister, Diana, and is survived by her beloved friend, Sister Tess Wysolmerski, as well as several relatives, thousands of students, and innumerable friends.

Sister Agnes’ Mass of Christian Burial will be celebrated on Saturday, March 10 at 10:30 a.m. in the chapel of St. Joseph’s Provincial House, Latham. The wake will be held Friday, March 9 from 4:00-7:00 p.m., also in the Provincial House chapel, with a prayer service at 7:00 p.m. Contributions in Sister Agnes’ memory may be made to the Development Office of the Sisters of Saint Joseph, 385 Watervliet-Shaker Road, Latham, NY 12110 or to the Sister Agnes Rose Burton History/Political Science Scholarship, The College of Saint Rose, c/o Office of Institutional Advancement, 432 Western Ave, Albany, NY 12203. (obituary written by Sister Agnes’ nephew, Dan)

To order memorial trees or send flowers to the family in memory of Sister Agnes Rose Burton, please visit our flower store.